The Fund is administered for contributing members in the Construction Industry in Zimbabwe by appointed Trustees made up of equal representatives of employees and employers in the sector.

Elisha joined the Fund in the Pensions Department in September 1994. In 1995, due to increase in death cases in the Fund and the need to process expeditiously the claims, the Fund created a section that catered for such claims and Elisha pioneered the establishment of that section. In 1997, he was appointed Assistant Pensions Manager and subsequently during that year acted as the Pensions Manager on the passing on of the Pensions Manager. In 1998, he was appointed Pensions Manager, a position he relinquished in April 2014 following his appointment as the Chief Executive Officer effective 1st May 2014. Elisha has believed in efficient delivery of service to the members at least cost and to this end has overseen staff rationalization of both the pensions department and the Fund in both his assignments as Pensions Manager and CEO, thereby saving the Fund in reducing the staff related costs. He has over 23 years working experience at Senior Management level.

Elisha is a holder of an MBA from the University of Gloucestershire, UK; diplomas and certificates in Business Studies, Management, SMI, Insurance, and Company Direction. Elisha is a councillor for Zimbabwe Association of Pension Funds, Institute of Directors – Zimbabwe and
National Employment Council for the Insurance Industry.

Josephat is the Pensions Executive of Construction Industry Pension Fund since 1 August 2014 and has vast working experience spanning over many years in pensions administration and marketing, strategic management and operations, human resources management and broking. Of these years, 15 years have been at various managerial levels. Josephat started his career in January 1994 as a Pensions Administrator with Old Mutual Zimbabwe (Pvt) Ltd and rose through the ranks to managerial levels. He played a pivotal role during the acquisition and installation of a pensions administration system at Old Mutual Zimbabwe (Pvt) Ltd for the Employee Benefits Division.

He is a full member of the Zimbabwe Institute of Management. Josephat was among the pension industry experts invited by the Ministry of Higher & Tertiary Education, Science and Technology Development in 2016 and 2017 during the process of reviewing the national curriculum for Pensions and Insurance. 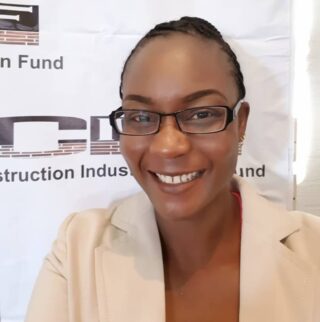 Phoebe Chawasarira joined the Construction Industry Pension Fund on 1 September 2015 having worked for First Mutual Holdings from 2000 in various capacities including Group Accountant and Finance Manager with TristarInsurance, a subsidiary of First Mutual Holdings. She has 15 years experience in Accounting, with 8 years at managerial level. She holds BSc (Hons) in Applied Accountancy from Oxford Brookes University, ACCA. She is also a holder of MSc in Strategic Management.

Ntando joined CIPF in December 1998. He has 19 years audit experience 13 of which acquired at CIPF. Prior to joining CIPF, Ntando was employed by City of Bulawayo, Tyre Treads and the Small Enterprise Development Corporation (SEDCO).

Mashington started his career at Fidelity Life Assurance in 1995 as an Agency Administrator. In 1999, when Fidelity Life Assurance acquired an Asset Management Company, he was transferred to Fidelity Life Asset Management Company (FLAM), the investment unit of the Fidelity Group as Assistant Accountant. Mashington held several positions such as Portfolio Administrator, Accountant and his last position with FLAM was Back Office Manager. He was part of the Management Team which turned around the performance of FLAM. He then joined Construction Industry Pension Fund in June 2009 as a Credit Controller up to November 2014 when he was appointed Property Manager. Mashington holds MBA, ACCA, CIS, Executive Diploma in Business Leadership and he is an member of the Institute of Chartered Secretaries and Administrators in Zimbabwe, member of the Zimbabwe Institute of Management and Public Accountants and Auditors Board (Zimbabwe)